Get a free quote 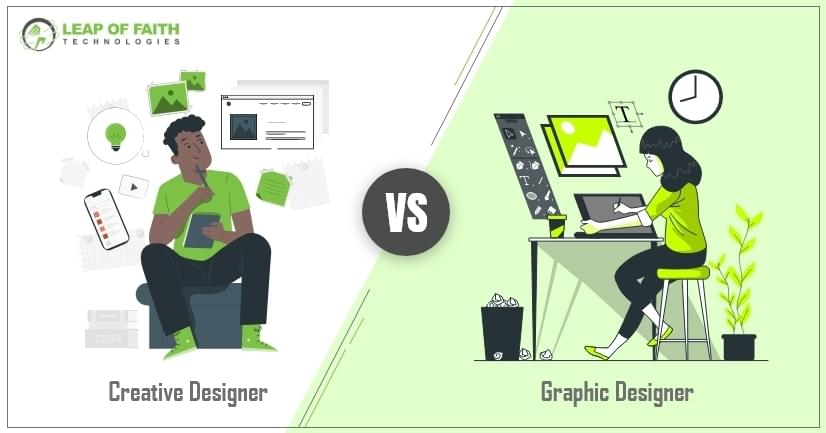 What is the difference between a graphic designer and a creative designer?

For many people, there is nothing different between the term graphic designer and creative designer. These are often used interchangeably, and this is more common in other industries. While there are many similarities between both the graphic designer and creative designer, there are also some dissimilarities that you need to be aware of. Hence, in this article, we will help you know about the differences between a creative and a graphic designer.. By the end, you will have an in-depth knowledge of the topic which we have begun with.

What is a graphic designer?

The main objective of a graphic designer is to conversate with the clients to listen to their ideas, and create the images accordingly. This job profile has been around since the inception of digital marketing. These designers have very conceptually centered on creating the best ever visual content. They have been working for years for various magazines, brochures, and catalogs. They’re also employed in the development of advertising. When it comes to presenting their story to viewers, graphic designers are in charge of choosing the fonts, colors, images, and words they use.

Graphic designers have grown into different service offerings such as web design, which has become a mainstream medium of communication. In addition, many graphic designers now have the ability to create a website. Graphic designers’ experience of web design is now just as relevant as their conventional fields of expertise.

What is a creative designer?

Moving on to the creative designer, he/she is someone who uses their artistic talents to promote a business or its goods and services. Creative artists work in publishing, television, and advertisement. Graphic designers, product designers, and visual artists are all examples of creative design employment. Some creative artists excel in artwork for magazines or blogs, while others specialize in package design and video and film collections. Designers who are innovative play a significant role in making a business establish its brand while remaining successful.

The creative designers introduce the ideas and concepts to build the brands by marketing and advertising them. Business owners that require design elements for labels, product packaging, or promotional materials hire commercial creative artists to create graphic design art. Placards for web pages or illustrations for television broadcasts are produced by these innovative designers in the electronic world. Creative artists work in the marketing and publication industries to create graphics that accompany or highlight reports or ad templates. Designers who have worked in one area for a long time can also pass their expertise to another.

Difference between a creative designer and graphic designer

The next difference between graphic and creative designers is that both of them use different mediums of communication. Graphic designers are completely centered on the print media, such as papers and magazines, and are only now beginning to branch out into web design. Creative designers have often prioritized multimedia platforms. They aren’t interested in conventional print media for their work.

Every task that graphic designers work on is supposed to have a special message. On the flip side, the creative designers are more involved with developing a single voice that can be presented through digital platforms, so this is not a standard they obey. The creative directors must keep coming up with new ideas every day to prove their worth. However, graphic designers must learn how to use the latest graphic tools and software. It is only then that they can get better job opportunities.

Whenever planning to hire a graphic designer or a creative designer, make sure that you do proper research about the same. Some ventures only require graphic design jobs, which may be less costly since the work involves updating rather than creating. A project that necessitates creative work, on the other hand, necessitates something more serious and can produce more spectacular results. Both creative and graphic designers are complementary, but you need to know what your requirement is and how you wish to proceed.

At LOFT, you can get in touch with the best graphic designer who can guide you and make things easier for you to understand. You can talk to them, and they shall tell you genuinely if or not they can help you. Hurry up and speak to our experts for assistance to grow your businesses!!!

How can we help you ?

Take Your Time. Change Your Perception. Find Your Solution.

“Working with Sumit was great! He was conducive to every change and allowed for me to be picky in the design phase. He was very understanding and tried his absolute best to make sure I got what I need. 10/10 would recommend”